After the intense first month at Compass, October came with several new activityes. The last volunteer of our Ability Quest for the Future program arrived from England bringing a lot of joy and two hula hoops with her. The fist week we had our first meeting with the retirement club. We played bingo, where also the workers joined in. The next time (on the 14th of October), when we went we let Bathsheba make a hula hoop prezentation which was grately appreciated by the audiance. We had to ask Pista bácsi to provide musik on hes jitter. This was a nice example of generations working together.

Together with one of the Italian volunteers I attended to two English classes at Gyakorló high school. One of them was successful in terms of cooperation with the students. We both worked with groups helping them to use present perfect in a less formal way, in conversation.

In the second class we met a very sensitive girl, who started to cry several times durring the class. At first we both got intimidated, but we ended up finding a way to handle it. Edoardo was perfect „partner in crime".

In the 5th of November I went back to Gyakorló high school together with Banu (Turkish volunteer, flat mate, friend) to attend to the same classes. Both were more successful than the one before.

We held a debate about the purpose of fashion. It was funny, productive and informal in the same time. I am looking forward to meet them again.

Early October (on the 9th) I joined three of the boys in the mother's shelter where we dug and cleant the garden. It was mostly phisycal work, but we agreed that we will do the garden planning for next spring.

We also involved two little girls who live in the shelter. They helped us and kept us in company for the entire afternoon.

From the 7th of October we had beginner Kids Club weekly with Banu. She is a wonderfull teacher and we clearly work nicely together. We have three boys, Kristóf, Domokos and Bendegúz. We play different games with them and in one month they already improved a lot. 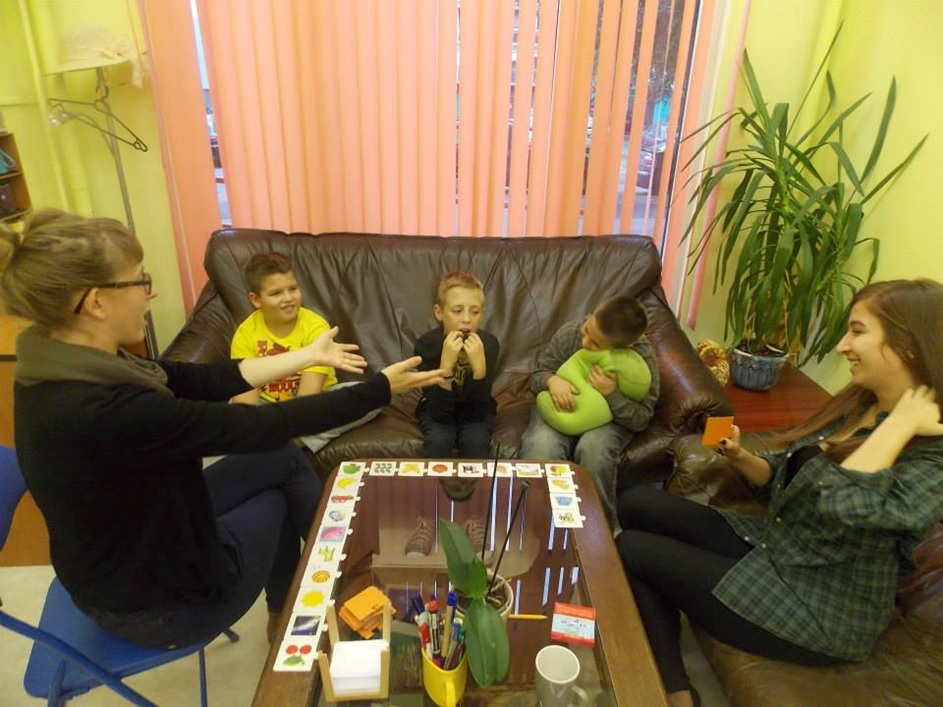 They reached a pont in their confidence that they propose games or topics they want to talk about. They also give feedback very often. In the last lesson we learned the body parts with Domi and Bendi. We also involved Alberto, our Spanish volunteer. They really enjoyed it. Us to. They all cheered us up with their smartness and sharp mind.

On the 13th I helped out Mailin and Joshua who held a German language class for a seven year old boy. At the end of the class I knew where horses live, what are pigs called in German and where do cats sleep. Unfortunately I can not participate in that class anymore.

One day after few of us went to held an info point in Táncsics High School. It was very informative, we gave away a lot of flyers about our activities.

The next day I joined two German, one Spanish and another Romanian volunteer in the local Kindergarden. We only stayed for one and a half hour, but it felt a whole day. The children were truly opened and acted freely regardless the language barriers. 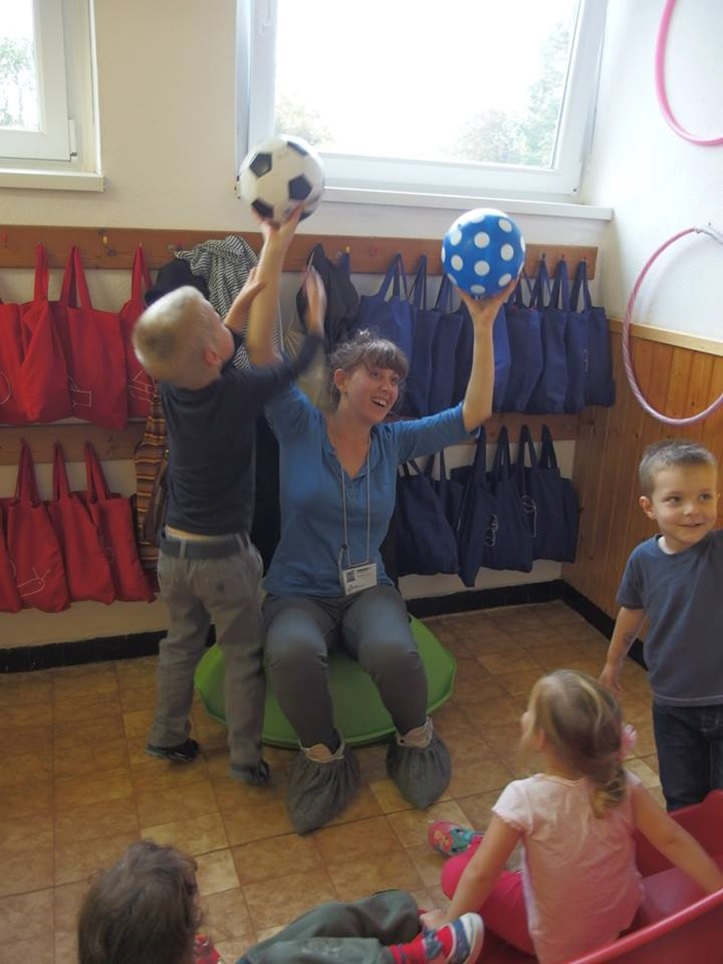 On the 15th the last day arrived for our two Turkish volunteers Emre and Sinan. We said good bye to them and gave them a proper going away celebration.

In my first advanced English class with Banu I met Júlia who speaks very well both English and French. She takes part in Compass's language clubs more than a year. She is very easy to talk to, very open minded.

On our second lesson we decided to go for a sight seeing lesson arround Kaposvár, where she could present the popular areas of the town. We ended up saving a cat. In English of course.

The following weekend 17th and 18th we attended to a job expo where we presented Compass organization, the youth exchange possibbilities what they can offer, our language clubs, Autumn camp.

There were a lot of other schools presenting themselves and a lot of students also. We also met deaf kids and had one of our volunteers talk to them with sign language. When we got very our free time we ended up being very creative. 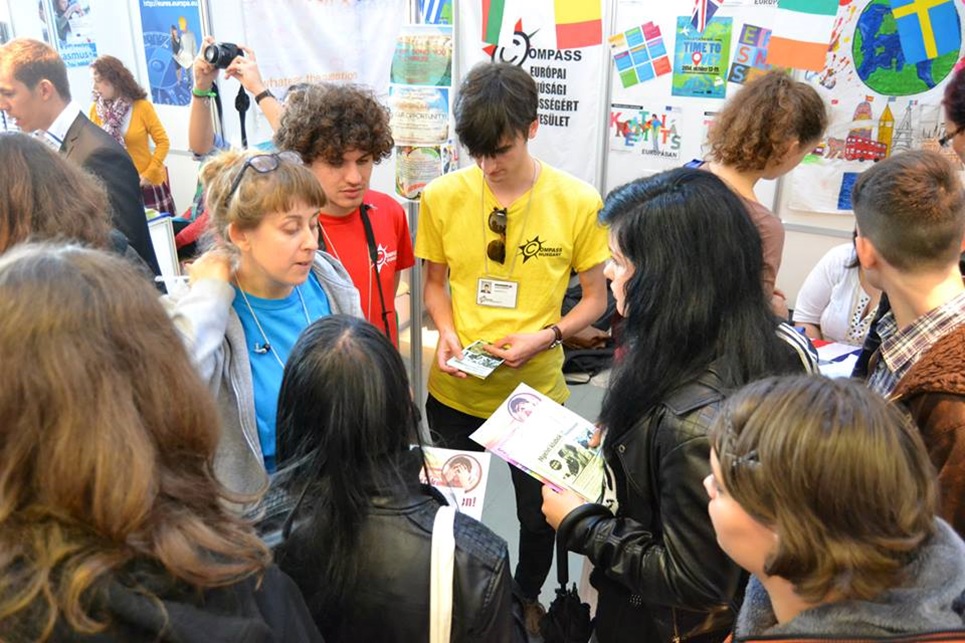 On the 22nd we held an Italian evening in the office, where we watched an Italian movie with hungarian subtitles. A lot of people gathered in the office to enjoy the comedy. The Italian volunteers translated for the other foregin volunteers so they wont be left out which helped to create a stronger team spirit.

The week after we worked for three days because of the the National Day of Hungarian Revolution. We spent these days of preparing for the Autumn Camp. I introduced new games and asked the volunteers to try them. I also had to translate Hungarian games where I faced the challenge of translating special expressions from one language to another.

The actual Autumn camp started on Monday the 27th unill the Friday the 31th. The first day we had icebraker games. We tired to find activities what involved a lot of movements, laughter and interaction between kids and volunteers. The age difference between the campers was quite wide, but surprisingly they all managed to figure it out how to work together. 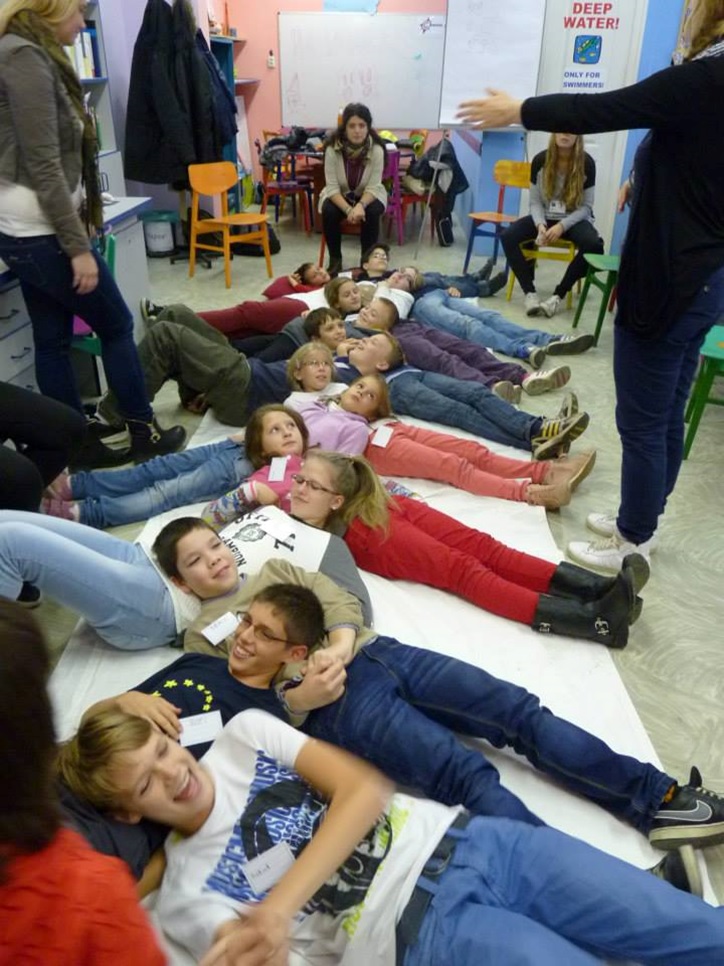 In the camp we talked in three languages. The programs were held in English and in German while the Hungarian speakers translated everything. After getting to know each other we introduced games what involved more and more speaking. Dixit was one of the most popular. Its a game that requires a lot of creativity in word and picture association. The players select cards that match a title suggested by the "storyteller", and attempt to guess which player selected which card.

Few of the older kids were able to translate basic expressions in both languages so we asked them to take over the translations durring these games. For them it was a good practice and for us a chance to check their level of English or German.

We celebrated Halloween in the middle of the week. Compass provided costumes and we had a fancy dress party with facepainting and limbo contest. The smaller ones got very excited about the facepaintings and got very creative with it. The older ones were bit more shy so we offered them the chance to paint our faces, in what they happily participate. So we all got fixed up. 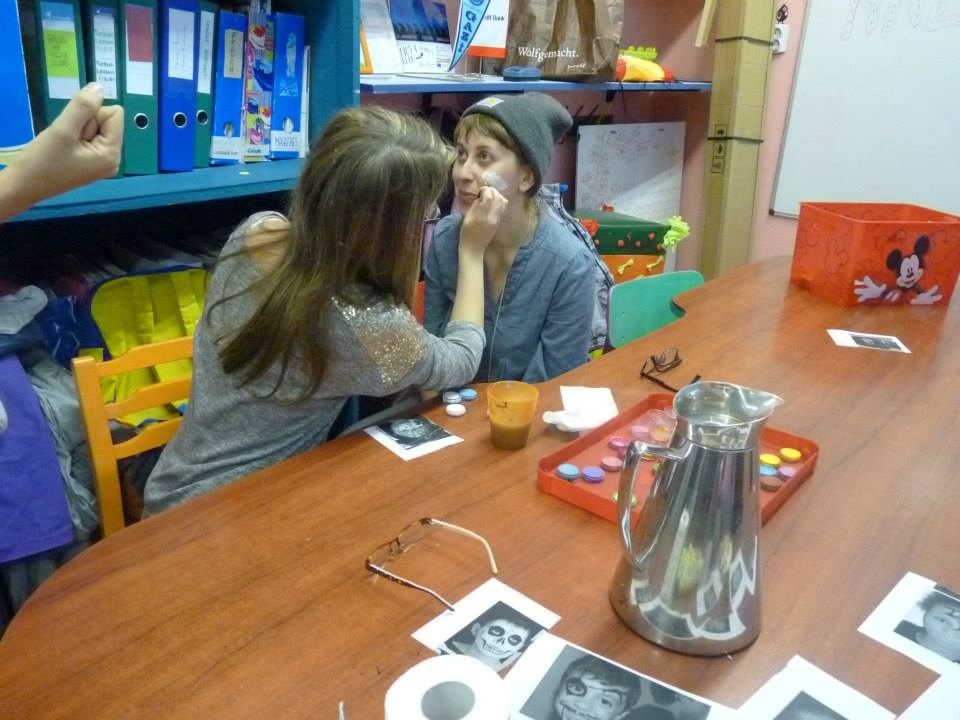 The camp was a nice ending for October. It bought us closer to the locals, our students got more opened with us and we met a lot of new people. We also experienced true team work within us with both positive and negative sides. But at the and of the day we all found a way to say something nice without words.