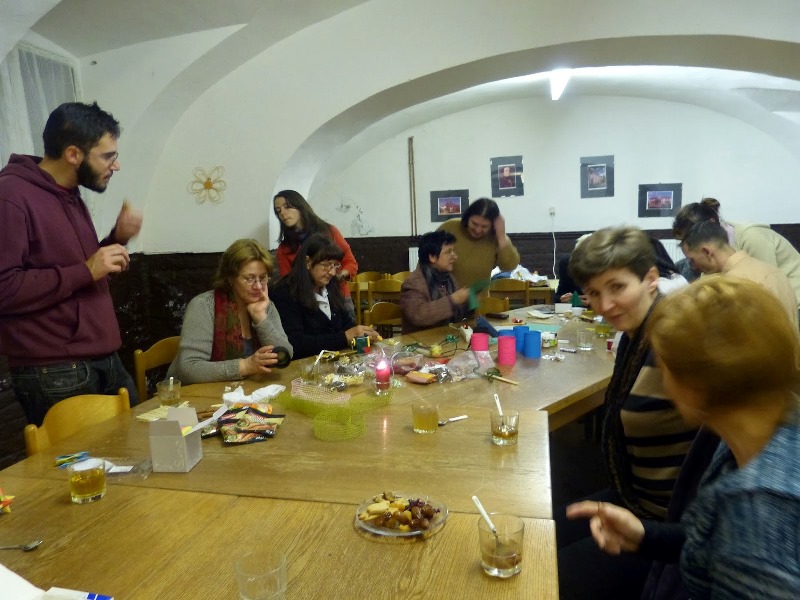 This is the end of the year. Surely, I still made math, Hungarian and English classes at the school, even attended to a few music classes with some of my EVS mates, to teach the kids songs of our countries, but all in all, December was mostly about Advent and Christmas. I think when you work with children this is to be expected.

It was the second day of December when we got a spontaneous invitation to participate at an Advent evening with the teachers from the Reformed Gymnasium (in Csurgó). This little event was organized in the basement of the gymnasium, where they usually have after school events. There they were a few tables where we could help make Christmas decoration for Christmas-related events that were planned in the second part of the month. I think the cookies and muffins with chocolate and cinnamon made a big part of the magic for me, but it was so nice and friendly to make some handmade Christmas decoration with all of the teachers.

Another memorable activity we had was visiting the house of children from Somogyudvarhely with 'Saint Nicholas' on the 5th of December. First of all, me and the other volunteers dressed up as 'krampus' (krampus is a beast-like creature thought to punish children during the Christmas season who had misbehaved), but nice, friendly ones, so the children don't get scared. Then we decorated a dray, in which Saint Nicholas was supposed to stay in with the gifts for the children and we were on our way. We visited many houses in the village, seen many happy children and Saint Nicholas gave presents to each of them. Outside it was pretty cold, but now when I think of it I think, that the cold air was just part of a unique and special atmosphere.
On the next day we had a Saint Nicholas Party at the school from Somogyudvarhely. That was also a nice event to be at, especially because I had the opportunity to just have fun with the children, talking, dancing and relaxing.
Later, the last weeks before Christmas we participated at concerts and other holiday related performances in Csurgó and Somogyudvarhely. Because of all these events I can say that December was a really special month and maybe the cold air and changes in the weather were easier to accept with all the festive atmosphere.