The last days in January had a really good training, the Euro desk. The training was for the local volunteers and for us as well. Who had the chance to learn about the eight key competences and team building. The day started from 09:00 until 18:00, in the early hours we started to play some games which were good to know each other better everybody had a partner and had to introduce, before that we had 10-15 minutes to talk to each other and talk about ourselves, after this we had to play the role of the partner. After the introductions every buddy had to think about one word and had to explain why that word was chosen, when the word had been described we had to stick the sticker paper on the flipchart. During the day we had a lot of tasks to do in which was the 8 key competences everybody had to write on a piece of paper what we know about this competences like digital, communication, mother tongue, foreign languages, mathematics, science and technology competencies, learning to learn, interpersonal and civic competences, and cultural competences.

The games we played they had the roll to get us to know each other better and to learn fast the names of the participants. The game is played in two groups and with a blanket, the blanket is put in the middle, and the groups can’t see each other, one person goes near to the blanket and waits until the other group is ready as well and when the blanket is dropped who guesses first the name of the other wins a person in the team, and it goes this until nobody remains in a team. At the end of the day we had 3 groups, and a task to make winnable project, our team chose a project in France, for religion equality, it was a hard challenge but we did it as a team, we discussed every detail like how could be done properly and to be winnable. After we presented the project to the organizers they said that with hard work and perseverance we would have the chance to win this project. After finishing this training I think all who where there got richer in knowledge and as a person. And finally we took a group photo with a big smile and a little bit tired.

On the 5th of January, my students came to the English lesson a little bit sad because they had just realised that in six months I’m going to leave them and I’m going to finish my project, it was a surprise to here that because I never had this experience that students of my would miss after I go away and sadly most than likely we are not going meet anymore, in a way it was a pleasant bust sad surprise. In the lesson I had a surprise for them I had prepared with my colleague a test what was of course online, surprisingly they had done a good job and we were proud of them. 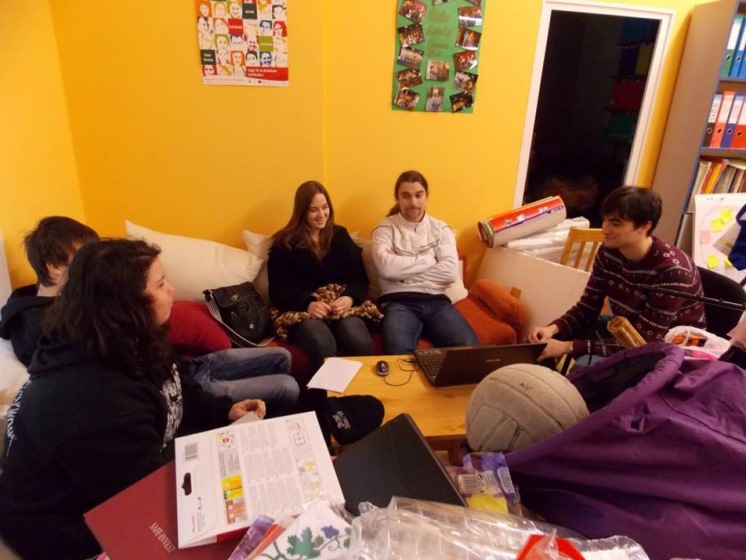 8th of February
The expected half marathon day arrived, it was a great event where 600-800 people participated, there where runners from younger age and there where even older age as well. The day started with clearing the points where the water and energy stands where. Compass was asked by the leaders of this organization to help with man power because they need them for the stands to help the runners to have enough water and energy food, the organizers gave us everything we needed to give the runners. At the end of the event our lovely president made us a surprise an ordered pizzas for us. In the and I can say that it was a really successful day, and the head organizer of the half marathon gave us a present for every volunteer who took part in this event.

One of the important events was the parade what was in Kaposvár. It all started whit selecting the costumes for the volunteers with a day earlier, this way I was the lucky one to get a small vampire cloak and paper crown. At the parade there where allot of organizations and schools. The parade started not far from the square, and when an organization reached the main square than there was an announcer who introduced every organization and what they did until now and what are their aims and achievements when we got there to be presented than every one of us had a flag in their hand or a banner with a country. After the presentations were made the teams stood in a circle and watch with the locals a short play by the Csiki Gergely theatre performing a comedy play. After the play came the main event to get the winter away and as the Hungarians have the tradition to burn a dummy made out of straws. As the celebration ended we were asked to go to the theatre (Agora) to have some snacks and tea.

On the 15th of March one of the most famous festival is the buso járás is held in Hungary in small town called Mohács, this event is taken out from history, when the Turks invaded Hungary and occupied this town, the locals were expelled from their town to a little island on the other part of the Danube , in one night the locals dressed up as scary as they could and they had been as noisy as possible, so they had returned to the town and scared Turkish soldiers because they thought that the locals are demons. This was my first time when I participated at this festival which I enjoyed allot. I had seen thousands of people marching and watching the carnival. It was the last day of the festival which was a whole week.

As every month and every week we have info points in schools, this is new for me because this is the first time when we had been asked to go to an English lesson. The teacher came to us in the break and asked us if we would like to attend to her lesson and interact with the students, we went and started to talk with the students, some of them were shy and they were just listening and paying attention the others were communicative and we had a really good conversation. At the end of the lesson the students were really excited and happy that they had the chance to talk with some volunteers who spoke only in their own language and English.

In the office we had our own carnival with locals and the volunteers, and the volunteers from Csurgo at this carnival everybody brought a little something, drinks, snacks and good mood. Everyone was dressed in a costume. We had games music and allot of fun. We had games, and the most interactive was the limbo, where the people could show how flexible they are. In the end there was a parade where we could show our costumes, and the winner was a little boy called Zeteny the sun of our coordinator. 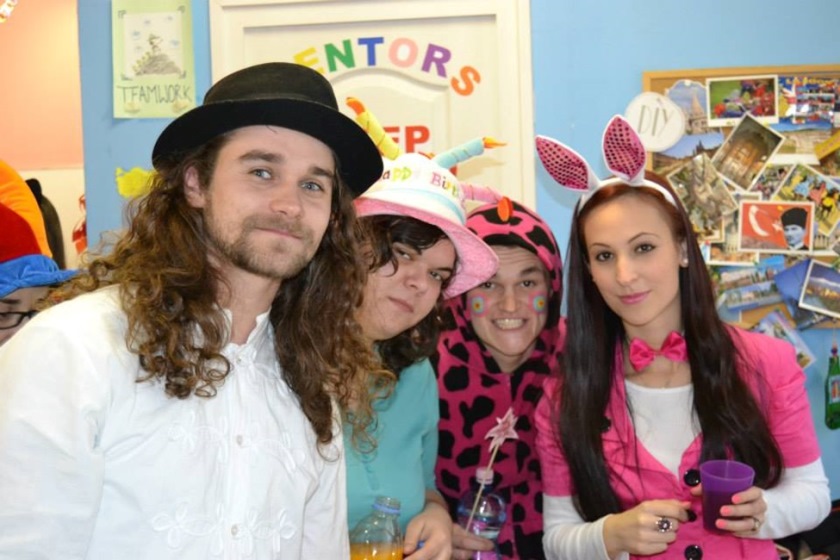 On the 24th we had a lovely country presentation from the Estonian girls. I can say only good things of this day because it was very interactive and instructive. The girls explained how they live in their country; they spoke about traditions, religion and history. We had the chance to taste some traditional foods and sweets. The invited people and the volunteers where divided in 3 groups and had different activities; one group tasted the food and drinks the others were looking at the souvenirs, and the third group was watching a short movie about their history, and how the country got the independence from Russia. At the end there was an auction where the souvenirs and sweets and drinks got sold and the money will be kept on a charity program.

Following the Estonian day the girls asked me to help them in the retirement club with presentation, I said that I will gladly help them. They asked me to help them with the translation because the oldies don’t understand English. We showed them a traditional dance which is danced in Estonia. The club and the elders enjoyed it and we can say that it was very successful. The elders where very surprised when I started to speak about the Estonian history and the Russian oppression what they had to endure during the wars and until they had received their independence.