First week: 7th-14th September.
In the first week of our volunteer work it was mostly getting to know each other and the city. On the 9th (Tuesday) we went to the office and started to introduce our selves, from where we come what hobbies we have.
After this we went out to a basket ball field and started to play name games. Because with playing and having fun we can learn much faster our fellow volunteers names. On the second training day we started the day with energizers. After we energized our selves we got back in to the office and started to play team games (8 key competences) and we had to describe the content. After this we had a task to draw Hungary, and put the known cities and place them in the correct places, after this we had to write traditional Hungarian food, and famous Hungarian personalities.

12th of September
The volunteers from compass were asked to go to Gépész high school for an event called "We are Europe" to help the teachers in the school's organized games for the students in which they had several tasks to resolve. The students had to do both mental and physical exercises.
14th of September
The volunteers had the occasion to visit the first school called Gyakorlo where the whole team was there, and we had an info point and introduced ourselves to the students. After the ceremonies we started to talk with the students, about what they like what would they like to learn what are there future goals.
18th of September.
Few of the volunteers were asked to go on a meeting, called Nostru. We had the chance to meet the project leaders. The project is called, Nostru (Social city rehabilitation and profession workshop) the project leader were talking about the Roma nation, and their success in the rehabilitation of their area, which included houses, sidewalks, play grounds. 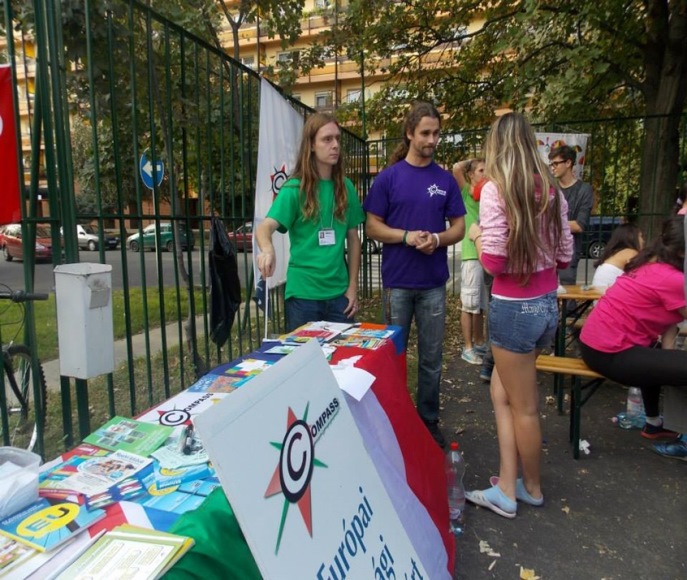 19th of September.
On this date was the summer ending day were the city renewed the play ground. We did an event for the kids, with face painting, contest for the children, were they could win an ice cream they played with hula hoops and bowling.
24th of September
At the end of the day from 16:00 until 18:00 me end my colleague Ozlem had an English club with two young boys who wanted to learn English and to improve their vocabulary. In this two hours we had grammar exercises and spelling lessons.
27-28th September.
We had the 24 hour contest "sleep another day" the contest contained a lot of tasks like building a car which is fuelled by natural energy like water, or we had to make an energy wind mill, we had quizzes, coreographies a lot of team work. After 22:00 the sports hall's door were closed and the outsiders weren't let in.
This whole event was very demanding and exhausting, but never the less it was a strong team building 24 hour contest, we had to rely on each other and help each other on the task which had been given to us. And I can say that we have become more united and a lot stronger team both in unity and in strength.
30th of September.
After the 24 hour competition the compass organization made a little surprise for us with a large cake and tasty vine. Andrea the head of the organization told us a few words about our performance, and she had told us really inspiring words end gave us strength and sustainment.
2 of October.
The Csiky gergely theatre of Kaposvár had opened a new season in this year, and also asked the help of the volunteers from Compass. Andrea the head of Compass told us that we are going to help the theatre with our aid and support. After this an actor showed us some times how people act when they are at a theatre play, and with this he was teaching us how we should handle this cases. We this we have the opportunity to work with the theatre, and in return we can see the plays free.