Soooo, yes, finally our blog is coming back on track. First of all – business. Otletfa is now Gergo, Anita and Danieles' responsibility, because the main person, who really worked here had left. So now, we are planning all sessions together. It means more work, but more experience too. And I think, we are doing a great job for now. For example, on Tuesday we prepared a game about violence. And it seems that guys really liked it, they were so into this, they discussed, thought more deeply than we could expected. That session was totally the best of all we had. On Thursday we had a movie evening. We watched "Pay it forward" directed by Mimi Leder. Who don't know, it is a movie about the boys' idea to change the world. He came up with an idea, that if he does something good to other three people, than those three people to other three people, the world may become a better place to live. 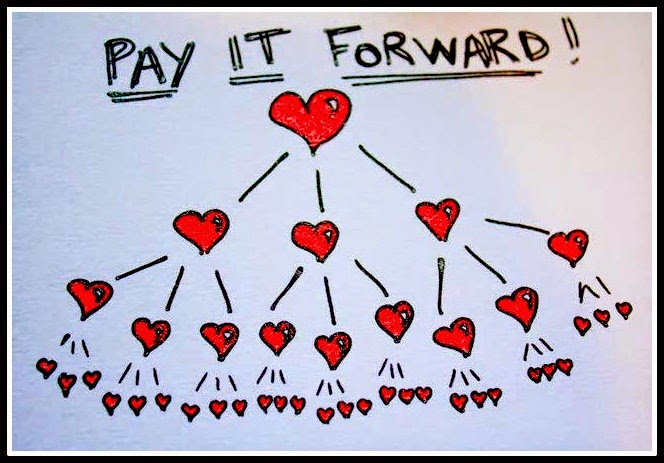 So, we really liked it, and we started to think if it is possible. What if all of us would start that movement, maybe we would change something. Maybe we would make a difference for one person at least, and we think it would be an achievement already. So just stop and think about this for a minute. What could you do in order to change a world? What would you do? And do you even care about this? Do you care about the stuff what is happening not only around you, in your yard, but in the world in general. And it is ok, if you don't. But still, one saying fits here perfectly: if you want to change the world, start from yourself. All in all, we are the start and the beginning. And everything is possible, we just need to start act, to do something. Less talking, more doing, you know.

So If you think that you want to make a difference u should know that on 30 th of April, 2015, there will be an official Pay it Forward Day. On that day people are encouraged to do something good to others. It is a worldwide phenomenon. So don't hesitate to join it! Of course this kind of favors are like love - can be shown not only once per year :) For more info: http://payitforwardday.com/ or http://www.pifexperience.org/.

Ok, other part of this blog will be with less philosophical views. As you may know, we are not only working here. We are having parties, getting to know more and more local people and trying to make friends with them. So on Thursday, we had the second guest in our beautiful apartment! It was Danieles' boyfriend. We played Uno cards, laughed and talked a lot aaand we had tequila too. It was an evening for getting to know each other better. And I think it succeeded! I am sure that many evenings like this are waiting ahead!